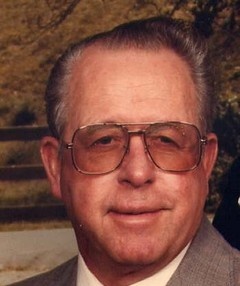 This great man passed away November 8, 2016 at the age of 90.  We knew him as a dedicated father, grandfather, teacher and mentor.  As a proud WWII Navy combat Veteran he inspired many by his service and sacrifice as one of America’s “Greatest Generation”, and inspired children and grandchildren to follow his example to serve this great country.   Ron was born December 20, 1925 in Magna, Utah to George and Edna Latham.  He graduated from Cyprus High and married Hope Howlett on on Aug 13, 1955.  He worked at Kennecott Copper for many years.  Ron was an avid hunter, fisherman who thoroughly loved teaching his children and grandchildren how to hunt and fish.  He was a handyman’s handyman who could fix or fabricate most anything.  We used to say that he was such a talented welder, he could probably weld 2 pieces of tissue together.   Once he retired from Kennecott, he became an avid golfer belonging to the Copper Club in Magna until his health no longer allowed him to hit the links.  Ron’s love and friendship will be greatly missed by family and friends alike, and we are all richer for having known him.  Ron is survived by children Gail (Dennis) Warr, Jerry (Lulu) Davis, Doug (Sue) Latham, Randy (Rowena) Latham and daughter in law Vickie (Corey) Latham; 16 grandchildren and more than 30 great grandchildren.  He was preceded in death by his wife Hope, parents, sisters Donna, Doris, Sally & Edna, brothers Bill & Glenn, and son Corey

To order memorial trees or send flowers to the family in memory of Ronald Latham, please visit our flower store.