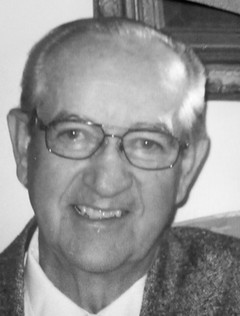 Spencer Orvil Ames was born April 30 th , 1930 to Orvil L. and Floretta Nelson Ames in Thatcher Idaho. He died peacefully with family by his side on April 30 th , 2016.

He was the fifth of nine children. The family later moved to Bacchus Utah and Spencer had a great childhood there. He loved his days in Bacchus and spoke of them fondly the rest of his life.  At age 14 he began mowing lawns for Hercules Powder Company and worked there the rest of his career. He graduated from Cyprus High School in 1948. He worked for Hercules for 47 years, retiring as an electrician.

He married Reva Nichols in the Salt Lake Temple on October 9 th , 1953. Spencer and Reva moved into a house in Magna, Utah, and raised their family there. They have three daughters, Carolyn (Shawn) Simons, Cheryl (Ted) Shaw, and Jolene (Gary) Nelson.

He was an active member of the LDS church and served faithfully in many callings throughout his life. He served in the US Army as an electrical engineer with the 375 th Army Reserves.

He loved the outdoors, especially the many camping trips with family to Anderson Meadow, near Beaver, Utah.  He loved to tease and have fun, always looking for an opportunity to startle or make you laugh.

He was preceded in death by his Parents and four sisters: Gleness, Dorothy, Imogene, and Betty. He is survived by his wife of 62 years, Reva. His three daughters; 12 grandchildren; and 22 Great Grandchildren. Sister June Jackman, Brothers Clifford (June), Max (Bonnie) and Nelson (Marsha).

To order memorial trees or send flowers to the family in memory of Spencer Ames, please visit our flower store.