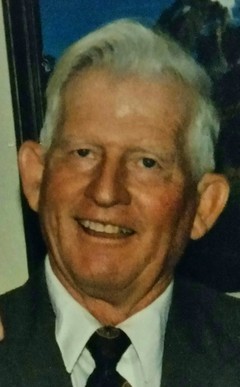 He helped out with chores and began mowing behind a pair of horses at age 7.  He continued to help keep the farm and family going but managed to graduate from Cyprus High School.

He served in WWII and qualified as a sniper, headed to Japan, but was literally pulled off the train line and sent instead to Germany to play football for the Army as a member of the Kaufburen Raiders. He and Anna Jane Blood had dated through high school and were married on November 12, 1948.  They were blessed with four children.  Anna passed away on November 1, 1984.  He married Laurie Holley on June 21, 1988. He farmed in Hunter and Tooele in his early years.  He became a businessman/owner of a Texaco station and Theron E. Coon Trucking Company. He also worked for Leslie Salt Company as a salesman. In 1976, he moved to live full-time in Angle, Utah to return to his love of farming.

Theron was a faithful member of the LDS Church serving in many capacities including twice as a high councilman (in Hunter and Panguitch), and as Bishop of the Hunter 4 th Ward.  He and Laurie served missions to Georgia, Nauvoo & Washington state.

He was a giant of a man and will be greatly missed.

The family wishes to express their deepest gratitude for the care that has been shown to our father from Laurie, whom he loved deeply, and all those at Cove Point Assisted Living Center (Provo) and the Peaks Care & Rehab (Orem ).

To order memorial trees or send flowers to the family in memory of Theron Coon, please visit our flower store.