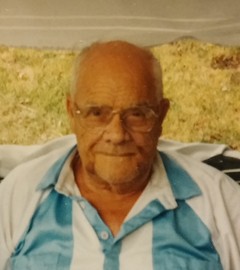 Thomas Edward Barnes born January 08, 1920 in Chattanooga Tennessee son of Edward Boyd Barnes from Arkansas and son of Nola Cook of Tennessee, passed away from complications of renal failure at the age of 94. He was a farmer in his younger days growing cotton and working the farm with hand tools and a mule. That’s when he met Leveta Irene McRoy when her family was picking cotton for extra money on the farm.

He was drafted for World War 2 and volunteered for the first Rangers, He completed the Ranger training and was going to do his first mission but the inoculations he was given caused him to get yellow jaundice. He was hospitalized with 9 other men until he got better which was several months, he was then assigned to the Combined Operations Army Amphibious elite units and followed the Rangers on all their assault missions. He served over 3 ½ years in combat during world war 2. He did water landings in Libya, Sicily, Italy and then finally the Normandy invasion. When he came back from the war he got back with Irene and they were married August 26, 1946 in Clay, Arkansas and stayed together until her death in 2011 at 66 years of marriage.

Thomas worked as a police officer at the Veterans hospital as well as a police officer at the Navy base in Clearfield, Utah. He finally got a job in civil service at Hill Air Force base where he worked and retired after 44 years of service. He was an inspector for parts and helped oversee the Top Secret and Classified room. He received many awards over the years. He was a wonderful family man and put his family first and he was always there to help in any way he could and what would you expect from a man whose heart was the size of the moon!

To order memorial trees or send flowers to the family in memory of Thomas Barnes, please visit our flower store.