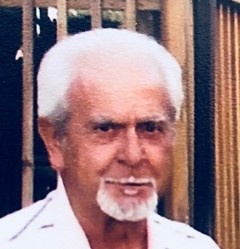 William H “Bill” Doutis Sr., age 86, past away peacefully on Sunday July 29, 2018 surrounded by his loving family.  He was born January 10, 1932 in Magna, Utah, to the late Harry and Mary Doutis.  Bill attended Cyprus High School and later served in the US Army and was stationed in Germany during the Korean War.  Bill ran a barber shop in Magna for many years; he was also an excellent artist.  He spent most of his life writing a book about his life.

The family would like to thank IMC ICU for their loving care.

To order memorial trees or send flowers to the family in memory of William Doutis, please visit our flower store.