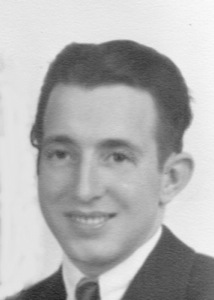 Don was the second born to Rose C. Sadler and William Wallace Kilpack at the Magna Farm. He graduated from Cyprus High in 1940 then went on to the U of U. He met his wife Rosella Hiat at the Coconut Grove. They loved to dance it was love at first sight. They were married, had five children, Bill, Darrell, Kevin, Debra, and James, and have 9 grandchildren, 6 great grandchildren, and one great, great grandchild. He loved the outdoors and passed that appreciation on to his children when he built his own cabin in the mountains and took them fishing on many of the lakes throughout Utah including Lake Powell and Flaming Gorge. He also built his own house in Magna. Don was Chief draftsman at the Galagher Co. He ended his career with traveling all over the U.S. giving seminars for Galagher's pumps. He helped design sump pumps, agitators, complicated electronics, and an oar car dumping systems for Kennecott Copper Corp. He also worked hard on his two farms in Hunter and Magna, and always had a large garden.  Don always would say that Rosella was the woman that he wanted.   They were married for 70 years and loved to sit holding hands while watching their big screen TV.  A wake will be held at the old homestead 7560 West 3100 South Magna, Saturday, February, 22, at 2 pm.  Family and friends are all welcome. Please come and share or listen to the stories with us about Don's life. Condolences: www.peelfuneralhome.com

To order memorial trees or send flowers to the family in memory of WIlliam Kilpack, please visit our flower store.