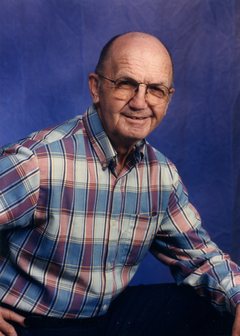 William Seth Gunnell Poppleton passed away peacefully on August 9 th 2014. He was born, on March 23 rd 1926, the youngest of 6 children born to Mary Owens Gunnell and John Mitton Poppleton.  Bill grew up on the family farm in Wellsville. He attended South Cache High School and loved to box and play football. He also loved to attend dances. He met his future wife, Estelle Jones at a dance in Hyrum. They were married in Preston, Idaho and began their family soon thereafter. They were later sealed in the Los Angeles Temple. He and Estelle had 3 children which he adored, Faye, Larry and Janet. In 1952 Bill took his young family to southern California and they loved it there. He worked in the aerospace industry for a time and eventually made a career change, taking a job with the Los Angeles County in law enforcement as a peace officer. In 1981, his beloved Estelle passed away after a long battle with cancer. In 1983, Bill married Janice Faye Wright. Within a few years he retired from the County. He and Janice moved to Orem and within a few years moved again to Magna to spend their golden years. Bill was an active member of the LDS Church where he served as an Elder, 70 and High Priest. He is survived by his wife, Janice; his youngest daughter, Janet; 9 grandchildren and 16 great grandchildren.

His funeral services will be held at the Peel Mortuary in Magna on Thursday, August 14 th . The viewing will begin at 9:30am with the funeral immediately following at 10:30. He will be laid to rest next to his wife, Estelle in Whittier California. Online condolences: www.peelfuneralhome.com

To order memorial trees or send flowers to the family in memory of William Poppleton, please visit our flower store.