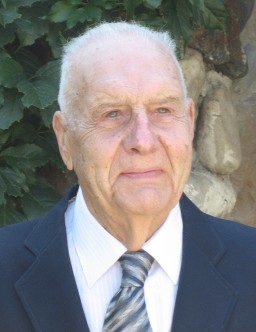 He was preceded in death by his wife Shirley in 1980 after 43 wonderful years, children Bill, Shirley, Terry, Gordon, and Morgan, 7 grandchildren and 1 great grandchild, brothers Ray, Elmer and John, sisters Alta Tinker and Dorothy Leivick.

Hod came to Utah when he was 14 years old, during the Great Depression.  The Depression shaped his life and actions until the end.  He joined the Civil Conservation Corps (the CCCs) when he was 17. Throughout the State he helped build fences, power lines, dams, and, as a "Cat Skinner" (Bull Dozer Operator), roads.  He then worked for the Bureau of Reclamation before starting work at Kennecott in 1941.  He worked as a crane operator and repairman, retiring January 31, 1977.  He started riding his motorcycle after he retired, making trips to Georgia, Texas, New Mexico, and Washington alone on "his bike".

Hod was a devout Catholic and served as a Sacristan for many years.  A viewing for Hod will be held at Our Lady of Lourdes Catholic Church located at 2840 South 9000 West in Magna on Monday, January 7th from 6 PM to 8:00 PM, followed by a recital of the rosary at 8:00 PM.  A funeral Mass will be celebrated at 11:00 on Tuesday, January 8th (preceded by a viewing from 10:00 to 10:45).  Interment at Mt. Calvary Cemetery in Salt Lake City. Online condolences: www.peelfuneralhome.com

In lieu of flowers, please donate to Catholic Relief Services in Hod's name.

Many thanks to Dr John Dietlien and Nurse Meggan Newbold for their wonderful and understanding care.

To order memorial trees or send flowers to the family in memory of William "Hod" Sadler, please visit our flower store.