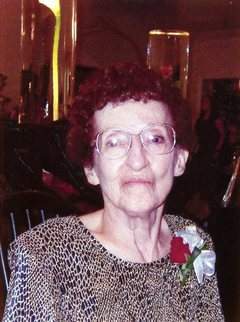 Magna -- Wilma Pappas fell asleep peacefully in the hands of the Lord on January 11, 2015, surround by her family. She is now healthy and at peace and with her twin brother, who died at birth, sisters, parents and friends whom she missed so very much. Aunt Wilma was born on November 28, 1924 to Angelo and Helen Liaminitis Pappas, was raised in Magna and lived in the same home her entire life. Our dear and sweet aunt lived a long and healthy life and was kind and very generous to her niece, nephews and many friends. Her loving niece, Elaine Zambos; nephews, Angelo (Christy) Zambos and John Zambos; brothers-in-law, George Zambos and Terry Vosnos; and great-niece, Angie and great-nephews, Jason and James survive Wilma. Preceded in death by her parents and sisters, Ida Vosnos, Tula Zambos and Mary Campbell. Aunt Wilma was so appreciative to all her friends who called and visited her. Thank you to the Beehive House in Magna for making the last 18 months of her life so wonderful. A very special to thank you to Lisa and Gigi for making her last hours peaceful. Funeral Services will be held 11 am Wednesday, January 14, 2015. at the Holy Trinity Greek Orthodox Cathedral, 279 South 300 West. Viewing will be 6-8 pm Tuesday January 13, 2015 at Peel Funeral Home, 8525 West 2700 South, Magna, with Trisagion service at 7:00 p.m. Interment Mt. Olivet Cemetery.

In lieu of flowers, the family would appreciate donations in her memory to the Benevolent Fund at Holy Trinity Greek Orthodox Cathedral. Condolences: www.peelfuneralhome.com

MAY HER MEMORY BE ETERNAL

To order memorial trees or send flowers to the family in memory of Wilma Pappas, please visit our flower store.